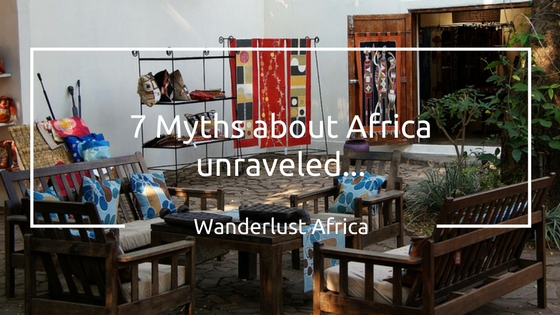 I will never forget the moment when I told my family and friends that I was moving to Africa! Jaws dropped, shocked stares and momentary speechlessness that eventually was followed with hair-rising myths about Africa! Even after many years living in Africa, visiting 17 countries and endless travels, I am still searching for the Africa that is so consistently misrepresented by most of the media. Though that Africa does exist, there is also an Africa that is thriving and that’s the Africa I want to talk about today. Here are my top 7 myths about Africa to be unraveled …

1. There is no technology in Africa

You could not be more wrong about that one! When I moved to Nairobi, Google Maps was my new best friend as I drove around and getting to know the outskirts of town. And believe me it worked. I must admit, that I wondered more than once if I was going the right way as what I was sometimes driving on didn’t look anything like a road but I always reached my final destination. As for mobile phones, the mobile network coverage in Africa is mind blowing. My most favorite feature though is MPESA payment in Kenya: secure cashless payment with your mobile phone! Considering that pretty much everyone in Kenya owns a mobile phone you can pay anyone for anything: the lady selling fruit on the street, your boda boda (motorbike taxi) driver, your electricity and water bills or your rent, restaurant bills and also the cashier at the supermarket till. You literally don’t have to carry any cash with you! And if your MPESA balance runs low you simply top it up with mobile banking – easy peasy!

2. You will live in a mud hut without electricity and carry water from a well Not quite! When I moved to Swaziland, I was living on a beautiful farm overlooking the valley and pineapple fields from my private veranda. I had a spacious tiled living room and a mezzanine floor that was my bedroom. I only had to turn on the tap to get hot running water and flicked a switch to get light and electricity. I do have to admit though that there were several power cuts, but who doesn’t like those romantic candlelight moments once in a while? And if all else fails just fire up your generator. I do agree there are mud huts in Africa, but why does no-one talk about the first-class architecture, the lovely designed residential areas including swimming pools, the skyscrapers in central business districts of major capitals and beautiful interior designs that are on a par with western standards?

If only! When I left for Africa, one of my best friends in Australia gave me a hot water bottle, which I took with an overconfident smile thinking to myself ‘yeah right’! Luckily it found its way into my suitcase. Nights in Africa can get quite chilly and during winter it is not just all sunshine and roses. I will never forget my first safari in Southern Africa – getting up before dawn and hopping on an open-decked land-cruiser. Brrrr…. Where was my hot water bottle then? The beauty is though, as soon as the sun comes out it warms up pretty quickly and resembles more of a European summer than a winter. Even on a safari in the Serengeti it can get quite cold, so I always recommend to taking a jumper with you.

4. You only will eat bananas That’s the funniest myths about Africa. But it’s actually true! Because fruit in Africa actually taste like fruit. I’ll never get enough of the sweet taste of a freshly picked baby banana! But kidding aside – Nairobi, for example, is a haven for culinary experiences. New restaurants are popping up at every corner offering delicious sushi, down-to-earth Nyama Choma (traditional roasted meat) and versatile European and Asian cuisine. And nothing beats a fresh Swahili fish curry with coconut rice along the East African coast or a tingling Piri Piri chicken in Mozambique. Unless you’re vegetarian, you’ll not go hungry in Africa. If you are vegetarian, be prepared to get some funny looks from the locals when you tell them why you don’t want to eat meat. On safari, there are no worries at all – safari camps or lodges do cater for all kind of diets and I’m always amazed by the delicious three-course-meals you get dished up in the middle of nowhere.

5. Africa is a disease-ridden country

This is probably the biggest myths about Africa in people’s mind! Africa is not a country – it is a massive continent with 54 independent countries, speaking over 1000 languages. It is as big as China, India, the United States AND most of Europe put together! Unbelievable, right? Kai Krause put together a beautiful map visualizing perfectly the enormous size of the African continent! It became even more apparent to me that in people’s mind Africa is a tiny place, when Ebola was a hot topic in the news. Around that time, I had endless discussions with guests prepared to cancel their trip to South Africa even though the Ebola outbreak was in West Africa. To put it in perspective, Frankfurt is about 6000km from Sierra Leone and Cape Town more than 9000km. There are direct flights from Sierra Leone to Frankfurt but no direct ones to Cape Town and it’s nearly impossible to reach Cape Town via overland route. I can’t deny there are diseases in Africa but it is very unlikely that you will get them. Remember the swine flu outbreak in Australia in 2009 or the foot and mouth disease in the UK in 1999? I’m pretty sure it didn’t lead to tourists canceling weekend trips to London or their long-awaited road trip across Down Under? Sometimes the media blows things out of proportion to sell newspapers or to get a bigger audience but on the ground things are often very different.

6. Africa is a dangerous place

Considering that wars, child soldiers and pirates make the news, I am not surprised that this is a common myths about Africa. I was not moving to Somalia though and although there are some countries and a few cities that I would not want to visit, there are many perfectly peaceful and safe places to live and explore – also considering the size of the African continent. In my opinion Africa is not more dangerous than other parts of the world; petty theft is most likely the most common crime you are likely to come across when visiting Africa. And this could happen in any other place in the world, right? You are more likely to be suffocated with kindness than anything else. I’ll never forget being totally lost in Mozambique – finding my way in the dark up to Tofo – no street lights, no signs and completely unsure if I was still on the right track! You wonder what happened to Google Maps? Well, back then I didn’t have a smart phone but I came across a bunch of locals who went out of their way to help me without expecting anything in return. In my experience Africans are very genuine and welcoming; and human relations and interactions seem to be of the utmost importance.

I don’t deny that there are a lot of poor people in Africa and poverty is obviously something that will strike you as a visitor. But not all African countries are poor – it is the distribution of wealth that is the biggest problem. Africa is a rich continent and it’s also a fact that some African countries have growing economies. According to Forbes Magazine, Kenya accounts for 40% of the gross domestic product in the East African region. It has the best performing currency and a highly educated, English-speaking workface, meaning a good education system and excellent universities are in place. Bloomberg cites that Ethiopia’s economy grew 8.7 percent in 2015 making it one of the 10 fastest growing economies in the world. And I am always excited to read about inspiring young African entrepreneurs that contribute to a growing economy.

This site uses Akismet to reduce spam. Learn how your comment data is processed.